Wow, it's hard to believe that this is my 20th post for the 2017 Family Search 52 Stories project. For others participating in the project, I guess they would be on week 24. But I took February off as I was writing daily for Family History Writing Month, so I'm not going to feel bad that I'm off a few weeks. The prompt for this post involves academics.

What do you consider your greatest academic achievement - earning a degree, passing a challenging class, getting high marks on a test or project, reading War and Peace?


I didn't have to think too long for this question. While I am proud of my undergraduate degree from Iowa State University of Science and Technology, I wasn't given a choice regarding my post-high school education. My dad told me I was going to go to college, and further that I would attend Iowa State where my older brother was enrolled. I wasn't interested in science or technology, nor did I have the skill set for either. I wanted to go to the University of Iowa, which had (and still has) an excellent writing program. But dad was adamant and you just didn't argue with him, so off to Iowa State I went.

It became abundantly clear following graduation, marriage and a move to St. Louis that an undergraduate degree in Family Services was not going to open employment doors. While my degree was highly recognized and respected in Iowa, St. Louis employers had no idea what it was since my diploma did not say "Social Work" on it. I've always felt that Iowa State was ahead of its time with the program because when an individual has a problem, it's not just their problem - it impacts the whole family. So we treated the whole family. It makes so much sense.

At any rate, with an unknown degree and the distressed job market that existed in 1978, I found myself employed as a teller in a bank. While it was not the worst job in the world, it was a far cry from what I was trained to do. It was clear that an undergraduate degree alone was not going to allow me to work in the field of helping families. And so, at the ripe old age of 23, I enrolled in graduate school full time at the University of Missouri-St. Louis. But this time I picked the curriculum and I picked the college.


The program could be completed in 12 months, including a three month internship. What I didn't realize until I went to enroll in my courses was that the classes were at night to accommodate folks who were working full time. (This was way before the time where you could check everything out online.) That schedule would put a crimp into the time I would be able to spend with my fairly new husband as he was working full time during the days. But we decided that for a year, we could make it work. It may have been for the best as I drove to campus early every day to avoid the traffic, which gave me lots of time in the library before my classes began.

My electives provided me with an opportunity to take daytime classes, and I took business classes for  all of those. I believe my business minor contributed to the fact that I was hired by Ralston Purina for my internship in 1980. Those classes also paid off down the road when we started our own businesses.

My Master of Education Degree in Counseling was awarded following completion of the internship in August of 1980. I was the first person in my family to receive an advanced degree, and I graduated with a 3.9 GPA. This degree, unlike my bachelor's, opened the door to jobs that required a masters in order to even be considered. To date, that is my greatest academic achievement.
Posted by Kim Wolterman at 7:00 AM 1 comment:

Happy Father's Day to all the dads out there - to the ones who are with us still as well as those who are no longer here to celebrate. My own father died in 2004, and I think about him often, but especially on his birthday and Father's Day. My writing prompt, of course, involves dads.

What is something you never understood or appreciated about your dad until much later in life?

It takes becoming a parent yourself to appreciate most things about your own mom and dad. Once you recognize the great responsibility you have in caring for and raising children, you begin to understand the pressure your parents were under. My dad grew up during a time where it was considered the man's job to provide for his family. Consequently, my mom never worked once they got married except for the short stint when they owned the Dairy Queen.

They went through some difficult times when their oldest son was diagnosed with aplastic anemia as a young child. In addition to all the hospitalization bills, the serum the doctors believed necessary in order to keep Roy alive came at an exorbitant cost. The family incurred a lot of debt, and in the end Roy died at the age of 7. Before he was even buried the administrative nun from the Catholic hospital was already hounding dad for money. He and mom spent years paying the hospital off.

Dad began his working career in transportation, which took our family from Cincinnati to Chicago and finally to Des Moines. When his company was bought out, he lost his job as Regional Sales Manager. How devastating and scary that must have been for him. He tried many other things after that, always involving sales in some aspect. Looking back, I believe he was a bit of a frustrated entrepreneur, not unlike his own father. 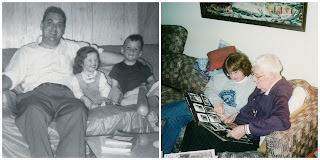 He was so pleased and proud when Jim and I began our own composting business back in 1991. I think he lived a little vicariously through our business endeavors. It was so great to be able to talk about how things were going whenever we got together. Trying to juggle jobs and family responsibilities while facing the unknown future of the company we started helped me to understand how difficult things must have been for dad when he was supporting a young family.

But I like to think that I got my tenacity and spunk from him, and I know that he would be proud of the things I have accomplished in my life. (Except he wouldn't understand the part where I wrote a book about him - he would shake his head over that.)

Thanks for all the strength and knowledge you passed on to me, dad. Happy Father's Day!

It's not Father's Day weekend, but this topic deserves more than one post as I have a couple of people I would like to write about. Today's writing prompt is:

Who are some other important father figures who have been influential in your life?

As anyone who has been in a relationship knows, when you get involved with someone you aren't just letting "that" person into your life. "That" person comes with a bunch of other people, whether family members, friends, co-workers or whatever. You may choose your significant other, but you don't get to choose the other folks.

Jim and I come from similar backgrounds, raised in Catholic families with comparable values. We both spent most of our childhood in Iowa, though he was from a small town and I lived in the "big city" of Des Moines - population ~ 200,000. We ultimately ended up at the same university and began dating when we were 19. I met his parents shortly after that when they came to Iowa State to see a play. We went out to dinner before the show and they immediately put me at ease. When they met my parents, they all hit it off as well - an added bonus. It's hard to believe that they have known me for 42 years - more than nearly anyone else except my spouse and my siblings!

As I got to know them better, I could see that the man who was to become my father-in-law was a very special person. He valued his family and all the men who worked for him, who were every bit family to him as well. Being raised in a household of 11 children - 8 of whom were girls - cemented the importance of family, I think. In the years that I have known him he has demonstrated time and time and again the utmost love and respect he has for his wife and his children. As the spouse of his only son, I am blessed to know his love as well, as are our children.


Early on in our marriage I found a framed poem "To My Other Mother" that I purchased for my mother-in-law one year. A recent Google search revealed that they have exchanged the word Mother for Father and sell the same poem for father-in-laws now. I decided this would be a good time to write one of my own.


From the very first moment we met
you accepted the girl I was;
the woman I was to become.
Though not your daughter
you have embraced me as one.

Our paths have intertwined
for more than four decades.
The memories we have made
are tucked away securely in my mind.
It’s been a treasured journey.

When it comes to the in-laws pool
I definitely won the lottery.
Some women don’t even have
one man in their lives they call dad.
I’ve been blessed with two.

What do you look forward to every spring? People, places, things, events, food, hobbies, traditions?

Each spring the thing I most anticipate is the whole process of getting my annuals into the planting beds and pots at our house. I keep a master list each year of what I planted and how the various flowers and herbs performed. Then I head off to the nursery to select the plant material. I like to patronize a nearby nursery as it is owned by a local family, and they have been very generous to our schools throughout the years. I know that I could buy the same things at one of the box stores for less money, but this is my way of supporting a hometown business. The employees are knowledgable too, and have helped me with many selections in the past.

It brings me great satisfaction to put each of the new little babies in the ground, and to watch them add color and interest to the yard. The herbs add flavor to our meals and beverages, and I like being able to walk out back and pick them fresh off the plant. As the season wears on, I do grow tired of going out into the heat to water them though. I am a mosquito magnet, and so I have to wear long sleeves and jeans to water, even during the day. That takes a bit of the romance out of the whole gardening thing, especially when the heat and humidity top 90.

Because we have been gone, I am way behind on my yard work. Hopefully things won't be too picked over by the time I finally get to the nursery.