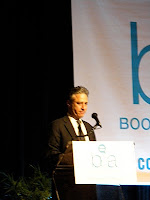 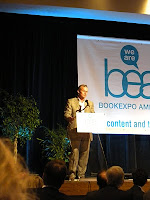 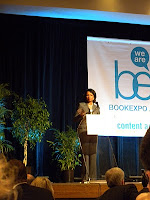 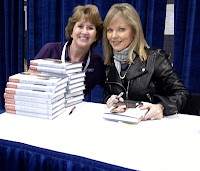 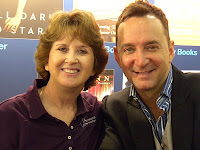 I've been delayed in posting this because my flight home from New York was canceled and I had to spend an extra night with a total stranger in a hotel by LaGuardia - but that is a whole different story covered in my personal blog at http://tinyurl.com/27muns8, if you are interested. Back to Book Expo...I attended the adult author breakfast first thing in the morning. While standing in line waiting for the doors to open three men came down the stairs of the convention center. The center man began yelling, "Yes! Yeess! Yeeesss! This is going to be great!" The ladies in line ahead of me had to inform me that he was Jon Stewart. Being a person who spends way more time in front of a computer than a t.v., I did not recognize him. But I could tell it was going to be fun to have him moderate the roundtable discussions. And fun it was! He kept the audience in stitches during his monologue as well as his introductions of the other speakers, which included Condoleeza Rice, John Grisham and Mary Roach. My favorite Jon line was "Hope you enjoy the show, the boat show comes in at 2:00 so get the hell out!" Although his reference to our "breakfast in a bucket" (referring to the fact that breakfast consisted of a few muffins and bagels served in a basket) was pretty amusing as well. And you could just tell that as the other speakers gave their presentations he was gathering fodder for the next "Daily Show".

Condoleeza Rice gave a poignant talk about her upcoming book, which describes how she went from being a poor black child in Alabama in the '60's to working in the White House. She describes her parents as being extraordinary ordinary people. When she concluded, Jon Stewart said, "Don't....make....me like you!"

John Grisham didn't really talk much about his new book but instead described how the idea for the only (?) non-fiction book he has written came from a newspaper article about a man who had been on death row was found to be innocent and set free, only to die a few days later of a disease. This got him wondering about how many other innocent people are on death row, and he now works for an organization trying to help death row inmates.

Mary Roach is an author I am not familiar with, but she was hilarious. Her new book, "Packing for Mars", will be out in August, though we were given an advance copy. She commented that if you think it takes a long time to send a man to Mars, just try waiting for a response from NASA when you send them an email with the subject line reading "Intercourse in Zero Gravity."

Best advice from the Q. & A. session:

Grisham: Until you are writing a page every day, you are not a writer. Have a routine.
Rice: Seek your mentors as people who are interested in you, not people who look like you.
Roach: Trust your instincts, believe in yourself.

Following the breakfast basket, I again made my way through the exhibit hall. I met with some fantastic authors, enjoyed my time chatting with other attendees as we waited in the lines, and picked up some interesting marketing materials from publishers and authors. As I had an afternoon flight (or maybe I should say what was supposed to be an afternoon flight), I only was able to spend half the day in the hall before shipping my prized autographed books home to St. Louis. Book Expo America was a fantastic experience and now that I know the ropes I will be able to get the most out of future BEA meetings. Congrats to all on a great meeting!
Posted by Kim Wolterman at 9:28 PM

Wow, that does all sound better than you could have imagined. All of it. And Clinton, too!

SHUT THE BACK DOOR!!

Yeah, I heard Condie Rice wowed everyone with her speech. And Jon Stewart - luckyyy!