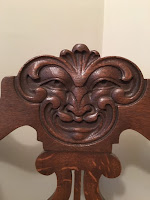 It was not until after my dad died in 2004 that the chair made its final journey to our home in St. Louis. I proudly display it in our entry foyer. When a new antique store opened by our house offering free appraisals, I did not hesitate to take the chair in for her to take a look at it. She told me that the chair was from the 1850s (so Louisa Koch was pretty close in her assessment of the chair's age), and was referred to as a North Wind Chair. The face carved into the seat was not intended to scare small children but rather to dispel bad spirits. The appraiser was excited to see the chair as she had only read about them. When I asked her if dad had diminished the value by refinishing it, she agreed that it was always best to have it in its original state. But then she said to me, "Do you like it like this?" When I told her the wood of the chair and the detail is much prettier this way, she said, "That is all that matters." Too true - I love it and am happy to have it in my family and my home.
Posted by Kim Wolterman at 8:00 AM