When I saw the writing prompt for this week, Strong Woman, I immediately thought of my mom’s older sister, Marie. The firstborn of eight surviving children of Michael Crusham and Mayme (Metz) Crusham, Marie was born 28 March 1912 at the family’s home on Rosemont Avenue in Cincinnati, Ohio. Michael and Mayme had purchased the home sometime after they married in 1911.

Marie dropped out of high school when she turned 16 to take a job to help support the family, which at that time numbered seven. She went to work at Pogue’s, an upscale department store located on Fourth Street in downtown Cincinnati. She would walk up the hill on Rosemont Avenue to Glenway Avenue and catch the bus each day. She never learned how to drive or got a license her entire life. She worked her way up in the business office at the store, and remained there until she retired with a nice pension. Unfortunately, that pension was later stripped away when Pogue's was purchased by another conglomerate.

Though she was an attractive, friendly and outgoing person, Marie never married and rarely dated, according to family members. My parents often wondered if a man had gotten “fresh” with her, and that’s why she stopped dating. She lived with her parents her whole life, and supported them and took care of them as they aged. Michael died in 1961 and Mayme in 1969. Their will stipulated that Marie could remain in the house on Rosemont until she no longer wanted to live there or until her death. Then the house was to be sold, with the money divided among the surviving children.

Marie’s hobbies were reading, quilting, and embroidery, and she was known to make a baby quilt for each of her new great-nieces and nephews. I still have the one that she made for my son in 1985. She also loved to travel and would take the bus to visit us in Chicago and Des Moines. After my mom and dad moved back to Cincinnati in 1984, they took her on a few road trips with them.

Unfortunately, a fall from her front porch around 1999 resulted in her being paralyzed from the neck down. She had to be placed in a nursing home, and could no longer do any of the things she loved. It was an unfair occurrence for someone who had never harmed anyone. But despite this, she never lost her easy-going manner, and never complained about what had been taken away from her. She celebrated her 90th birthday at the facility in March of 2002, and died there on 2 July 2002.

We all loved Aunt Marie, and I never doubted the love she had for me as well. She was the epitome of a good Christian, of a person who honored her mother and her father, and one who gave of herself without asking anything in return. Despite the number of years that have passed, I miss her every day. Here is the poem I wrote for her, which was displayed at her funeral. 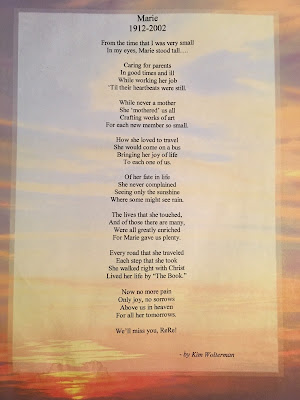