As a long-time fan of Nora Roberts, I have read every book she has ever written, including the In Death series she writes under the pen name of J.D. Robb. Did you know that she began writing back in 1979 while stuck in the house with two small children during a blizzard? Because I write non-fiction I am exceedingly amazed by writers who spin stories out of their own imaginations, and Nora's books are always filled with interesting people that I would like to meet in real life. Her women are strong and independent, the men sexy and intriguing, and the romance scenes...well, let's just say they are hot!

The latest trilogy from Nora is set in Boonsboro, Maryland, which is near where she lives. They involve the remodeling of a 1790s era inn and the people and places in the town. What is interesting about the series is that many of the places in the book actually exist. Nora bought the decrepit inn several years ago and had it remodeled into an eight room bed and breakfast. Each of the rooms, with the exception of the Penthouse, are named after famous literary couples. The inn really was mostly furnished with pieces from Basts of Boonsboro. Vesta Pizzeria is real, and is owned by her son Dan and his wife. Turn the Page Bookstore, also in the trilogy, is alive and well on Main Street. The bookstore is owned by Nora and her husband. The fitness center (owned by Nora) and new restaurant (also owned by son Dan) discussed in the second book are now open to the public.

At first glance you might think that the Inn Boonsboro trilogy was just a way for Nora to market her inn, bookstore, and the restaurants owned by her son. That thought did briefly cross my mind. But last weekend I had the opportunity to visit Boonsboro and stay at the inn. What I realized is that Nora has taken her time and resources to breathe new life into a town of 2,800 people that, without her help, might dry up and blow away like so many other small communities. The inn and restaurants provide food and lodging to the hundreds of women and men who flock to the town every year for one of Nora's book signings.

In speaking with the woman at Turn the Page Bookstore, it became clear that Nora Roberts and her book signings are the reason that this store has been able to survive when so many other independent bookstores have closed their doors. It also offers a venue for local artists to display and sell their crafts.

At the end of my visit I came away with a whole new respect for the woman who has enabled me for so many years to slip away into the lives and worlds of her fascinating creations. Beyond the characters in her books, Nora has helped many others in Boonsboro to live their happily ever afters. 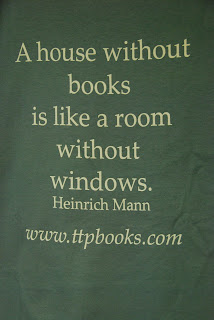 Posted by Kim Wolterman at 4:31 PM

I will have to read a Nora Roberts book.....