The 1930s were marked by the Great Depression, an event that was felt world-wide. It originated in the United States following a fall in stock prices in September of 1929 that sent Wall Street into a panic and wiped out millions of investors. Consumer spending and investments dropped, leading to a record unemployment high. Despite the relief and reform efforts of President Roosevelt, the effects of the depression lasted until 1939 when WWII rejuvenated the American economy. Cincinnati felt the impact of the Great Depression just like the rest of the country.

According to the 1930 census, Michael Crusham was 42 years of age and employed as a printer in a print shop. Daughter Marie, at 18 years, worked as a clerk in a dry goods store. Because the census was taken in April of 1930, only six children were listed as the twins were not born until June. The Crusham house is valued at $4,000. For the first time, the census asked whether or not the household owned a radio. The government was attempting to see how well this new technology was being embraced. While the answers revealed that 12 million people had access to a radio, the Crusham family was not among them.

While Michael maintained his job in the printing industry during the depression, one can only imagine how stressful it must have been for him and Mayme, especially after the twins were born in June of 1930. There were ten people to be fed, clothed, educated, and otherwise taken care of, and only Michael and Marie were bringing income into the household. Eventually Catherine dropped out of Seton High School after her junior year in order to help the family. She went to work stitching basketballs at a sporting goods factory.

Stella was the first child to leave the family when she married Lawrence (Bud) Wambaugh on 6 May 1937. Bud was a metalworker residing at 912 Hawthorne Avenue with his family. Following their marriage, he and Stella purchased the home across the street at 911 Hawthorne Avenue, where they spent their entire married life. They welcomed their first child, and the first grandchild of Michael and Mayme, on 15 October 1938. Unfortunately their son, Joseph, only lived for 5 days, passing on 20 October 1938.

The 1930s were filled with highs and lows for the Crusham family, with the birth of their twins in 1930, the marriage of their daughter in 1937 followed shortly by the death of Michael's father in July of that same year, and finally the birth and death of their grandson. 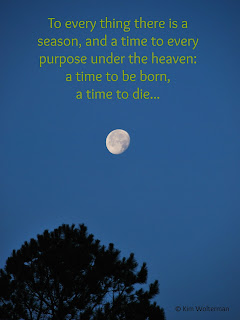 Posted by Kim Wolterman at 7:52 PM