As November is the next-to-last month in the year, Next to Last is the writing prompt this week.  For this prompt I will be writing about my paternal great-grandmother, Louisa A. Boegel. Born in Cincinnati, Ohio in July of 1870, Louisa was the fourth of seven children born to Johann Heinrich Boegel and his wife, Sophie Elizabeth (Suhre) Boegel. Johann had emigrated from Prussia, arriving in Baltimore on 20 July 1858. On 26 November 1858, he married Sophie Suhre in Cincinnati. In later years he owned a saloon on the northwest corner of Ninth and Elm Streets.

In the 22 June 1882 edition of the Cincinnati Enquirer, an article appeared on page 8 entitled "Good Pupils" with the subtitle "Who Have Been Tried and Passed". The article went on to list the names and average percentage of all the pupils of Grade D who were examined for admission to the Intermediate Schools and received a score of at least 70%. Under the Third Intermediate School, Sixth District appears the name Louisa Boegel, with a percentage of 70.3. There was one student who scored 70%, making Louisa the next to last student in the class.


On 18 January 1891, Louisa married Henry Kubler at St. Gabriel’s Church in Connersville, Indiana. Together they had two children: Joseph (my grandfather), born in 1891 and Ethel, born in 1894 and died in 1895. Louisa was listed in various city directories as being a seamstress.

Louisa may have been next to last in her class when she was 12 in 1882, but without her I wouldn’t be here. And we all know what the person who graduated last in the class in medical school is called - Doctor.
Posted by Kim Wolterman at 5:00 AM No comments:

This week is Thanksgiving, so the writing prompt is Thankful. The thing that I am most thankful for, from both a personal and a genealogical perspective, is the fact that my dad was a person who embraced new technology - at least to a certain extent. Because of this, I am blessed to have old photos of my family, as well as his military days in WWII, because he was comfortable using a camera. He got a Polaroid Land Camera in the early 1960s, and we were all amazed when the photos popped out of it.

But the best thing he did was to purchase an 8mm movie camera in the 1950s. While he did not shoot a lot of film, I am so fortunate to have in my possession five reels that have survived the years. Included were the 50th wedding anniversaries of both sets of my grandparents! Recently I had the films converted to an mp4 format, using a local service provider. The films were in decent shape considering they haven’t exactly been stored properly the past 50 plus years.

The film is priceless to me, and to have the opportunity to have my parents, grandparents, and other loved ones brought back to life is such a treat. My goal is to edit the footage, removing film that is too light to be distinguishable. I also want to add still photos, text and music to the final product. I did a little of this before I went to Cincinnati in October, creating one mp4 for the Kubler relatives to see and a separate one for my Crusham family. But for my siblings I will make one continuous film that can be shared with them. Hopefully they will treasure the memories as much as I do.

Thanks, Dad - and Happy Heavenly Thanksgiving!
Posted by Kim Wolterman at 5:00 AM No comments: 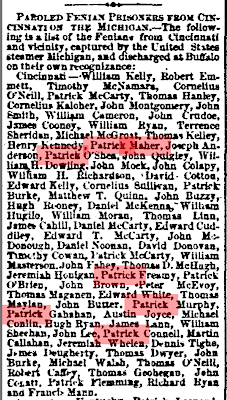 While I have some photographs of male ancestors that I have collected over the years, I do not have one that I think qualifies for the writing prompt Bearded. Instead, I’ll talk about the three brothers who all looked very similar, right down to their stylish mustaches.

My maternal second great-grandparents, Joseph Henry Metz and Barbara (Karch) Metz of Insheim, Germany had nine children, four of whom were boys. The youngest boy, who was also the baby of the family, was my great-grandfather Peter Metz.

One child, Magdalena, died in Insheim, Germany when she was just two months old, but I believe all of the other children lived and died in the Cincinnati/Covington greater area following their emigration to America.

For three of the four boys, I have been able to locate photographs. The oldest child was Nicholas Metz, who was born in Insheim on 8 August 1842 and died in Cincinnati on 26 February 1920. He arrived in America in 1866, traveling with his mother and five of his siblings aboard the Fulton. By the 1870 census he was living in Cincinnati with his mother and three brothers, Joseph, John, and Peter. Nicholas married Carolyn Blanner, and they had four children: Magdalena, Rosa, John, and Mary. The photo shows him with his sisters Barbara Metz Zimmer, Anna Maria Metz Radenheimer, and Elisabeth Metz.

Joseph Metz was born 2 October 1853 in Insheim and he died 25 September 1925 in Cincinnati. He was on the same ship as his mother and siblings, arriving in America in 1866. In 1877 he married Magdelena Germann, and they had five children: William, John, Joseph, Elizabeth, and Helen. Joseph is pictured with his sister Rosina Metz Strassel.

Peter Metz (my great-grandfather) was born in Insheim 30 May 1862 and died in Cincinnati on 4 February 1935. He was only four years old when he arrived in America with his family. On 3 November 1887 he married Bridget Maher, and they went on to have five children: Helen, Mary (my grandmother), Alice, Stella, and Walter. He and Bridget are pictured, probably in the 1920s.

What struck me first in looking at the photos is how much the three men resemble each other. The second thing I noticed is that they all wore their mustaches the same way. I have never seen a photograph of their father Joseph Henry Metz as he died of a bee sting in Insheim at the age of 43. It would be so interesting to see if his sons looked like him. And if he, too, favored wearing a mustache.

Since we just celebrated Halloween, this week’s writing prompt is Frightening. Though we just had a television show with ghosts filmed in our house, we have not experienced any paranormal activity here nor have I heard of any ghost stories in the family. I did have a creepy experience in a cemetery when I was young though.

My Grandma and Grandpa Crusham lived on the north end of Rosemont Avenue in Cincinnati. The area was known as West Price Hill. Not too far past my Uncle Charlie’s house, which was easy walking distance from my grandparent’s home, was the entrance to Price Hill United Jewish Cemetery. Going through the cemetery was a short-cut to Rapid Run Park. As there was not much to do at Grandma’s, my brother, cousins and I would head to the park to play.

One day we stayed a little too long at the park, and it grew dark. As we were walking through the cemetery, one of my cousins began telling ghost stories. All of a sudden we heard a strange noise, and it wasn’t coming from any of us. Tha-wunk, tha-wunk, tha-wunk! What in the world could it be?

We began to walk faster, but it seemed we were heading towards the noise and not away from it. Our imaginations ran wild as we envisioned grave robbers opening a crypt, or murderers digging into the ground to dispose of a body. We began to run.

As we rounded a corner we came upon several boys approaching us. One of them was using a baseball bat like a walking stick. Tha-wunk, tha-wunk, tha-wunk! We laughed nervously as we passed them, and made fun of each other for being scared in the first place. But after that we made sure we were always on the way back to grandma’s house way before it got dark.
Posted by Kim Wolterman at 5:00 AM No comments: