For Week 20 I am switching over to my husband’s maternal grandparents. His grandfather was Joseph John Pfeffer, who was the first son born to Mathias John and Filomena (Reichel) Pfeffer on 19 March 1900 in Cairo Township, Renville County, Minnesota. The family lived on a farm in Renville County.

When he was 18, Joseph registered for the World War I draft. He indicated that his occupation was farming, and that he was employed by Mathias Pfeffer in Cairo. He stated that he was of medium height and build, with brown eyes and brown hair. There is no indication that Joseph served in the military.


The 1930 census showed the family residing in Cairo, and Christina’s 37-year-old brother John was living with them as was Joseph’s 16-year-old brother Martin (this was likely because their father Mathias Pfeffer had died in 1929.) John worked on road construction and Martin as a farm laborer.

By the time the 1940 census was taken, Joseph, Christina and their children were living in the town of Fairfax. The census further indicated that they lived in the same house, which they owned, in 1935 as well. Joseph was employed as a government worker.

On 14 February 1942, Joseph registered for the WWII draft. He gave his weight as 165 pounds, height as 5’9”, listed his complexion as light, indicated he had brown hair and brown eyes, and worked for the WPA. The Works Progress Administration (WPA) was an employment program created by President Roosevelt in 1935 during the depression. The program lasted for 8 years, and put around 8.5 million Americans to work.

Nearby projects of the WPA included the erection of Morton rainbow granite buildings and restoration of the original fort commissary at Fort Ridgely State Park in Ridgely Township, construction of several stone structures in Flandrau State Park in New Ulm, and installation of hiking trails, stairs, and seven new buildings at Minneopa State Park in Mankato.

Joseph died on 22 November 1977 in Fairfax at the age of 77, a mere 4 years after the death of his son Joseph. The cause of death for the senior Joseph was listed as massive gangrene of the small and large bowel due to thrombosis of the superior and inferior mesenteric arteries. He was buried in St. Andrew’s Catholic Cemetery in Fairfax.

Posted by Kim Wolterman at 4:46 PM No comments:

This week’s post is about my husband’s 3rd great-grandfather, Albert Herman Lutchel. Albert was born in 1813 in Nordlohne, which is a village in the Lower Saxony county of Bentheim. Germany. His parents are unknown at this time. Sometime before 1848, Albert made his way to America.

By the 1870 census John had remarried and the census shows that his and Anna’s son Henry was living with him and his new wife, in addition to three children he had with the new wife. None of Albert and Anna’s 5 children (their daughter Anna Catharina died at the age of 10 in 1863) remained in the household of their stepfather. One can only imagine how terrible it must have been for them to lose both of their parents so young, and to then be separated from each other.

This post marks the end of the Lutchel family line in my research.
Posted by Kim Wolterman at 9:52 AM No comments: 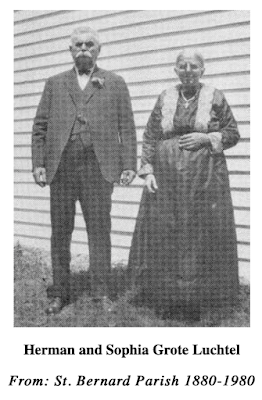 So far I have covered the Wolterman, Determan and Woerdehoff families in my husband’s tree. The next series of posts will focus on Theresa (Determan) Wolterman’s mother and her family.

Theresa’s mother was Mary Anna Luchtel. Mary was born 17 June 1873, the first child of Herman Bernard and Sophia (Grote) Luchtel. Though Mary was born in Dyersville, Dubuque County, Iowa, by the time the 1880 census was taken, the Luchtel family resided in Wheatland Township, Carroll County, Iowa. That’s a distance of nearly 223 miles!


It is interesting to think that if the Luchtel family had not made the move, Mary would have never met Johann August Determan, whom she married in Breda, Carroll County, Iowa on 27 January 1891 when she was just 17 years old. Their marriage and a listing of their children was covered in Week 8, which can be found here.

Mary and August’s story was also covered in Week 7, which can be found here. Seven years after the death of August on 18 March 1910 in Butte, Boyd County, Nebraska, Mary married Bernard Clemens Schulte (known as Clem) and moved with 4 of her children to the Schulte farm in Breda, Carroll County, Iowa. The 1920 census for Wheatland Township indicates that Clem and Mary were living on the farm with Clem’s children Sarah, Mary, and Edward, and Mary’s children Clement, Theresa, Martha and Joseph.

Clem died in Breda on 11 March 1930 at the age of 81, leaving Mary a widow at only 56 years of age. The 1930 census shows her renting a home that is not located on a farm. Her son Joseph is living with her. By the 1940 census, Mary was living alone in a home in Breda that she owned on Artz Street. This is a relatively short street that runs between N. 1st St. and N. 2nd St., within easy walking distance of St. Bernard’s Church. Further information on the census shows that Mary was living in the same house in 1935, and that the highest grade she had completed in school was 6th grade.

Mary was 82 when she died in Fairfax, Renville County, Minnesota on 25 November 1955. It is probable that she had relocated to the Fairfax area to be close to her daughter, Theresa (Determan) Wolterman, and her family. Mary was buried by her first husband, August Determan, at Saints Peter and Paul Cemetery in Butte, Nebraska.

Posted by Kim Wolterman at 7:54 PM No comments: