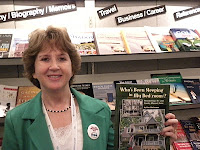 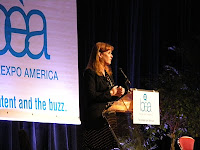 Today began early with a children authors rountable breakfast beginning at 8:00. I arrived at the convention center at 7:30 to find a long line already assembled waiting to get into the meeting room. (People really need to get a life - we all had tickets to get in!) We were treated to an original, patriotic song performed by three men and one woman from the military, which brought the crowd of 1,000 to its feet.

The moderator of the roundtable was Sarah Ferguson, and I have to admit that I really liked her. She wasted no time in referring to her latest media disaster by saying that it was a challenge to get to the Javits Center as a number of people got in her way on the drive there, referring to the media. "But you might have heard about that," she said. She poked fun at herself by saying she should take a page out of one of her own books, mentioning "Ashley Learns About Strangers". Author Cory Doctorow talked about how he became a young adult author, being influenced by his father's love of telling stories. Mitali Perkins followed Cory and mentioned how libraries had influenced her love of books. And Richard Peck finished his presentation by stating, "The only way we can write is by the light of the bridges we left burning behind us." The speakers were all excellent, and I hope that the adult authors breakfast tomorrow lives up to this one.

I spent most of the rest of the day visiting the exhibition hall. Oh, my! It truly is overwhelming for a first timer, despite all the tips given out by Dan Poynter yesterday. I have more autographed books than will probably fit in my suitcase, and I still have tomorrow to get through. A few of the authors I read we here, so it was an honor to get to meet them. And to get exposed to some new authors (at least new to me). My book is displayed in the IBPA booth, and I have to admit it was a thrill to see it there. I finished up the afternoon with a panel discussion on "Are E-Books Good for Authors". The panel consisted of an agent, three publishers and an author. An interesting mix, I thought. Why weren't there more authors on it? And in fact when they were asking about the demographics in the audience (agent, publisher, book sellers, etc.), they didn't even ask about authors until prompted by someone. At least the moderator sheepishly said, "That's what you'd expect from a publisher, right?" It was indicated by most of the panel that in the new digital world the author would receive a smaller piece of the pie, and the publisher a larger piece. I know what I was thinking - No, more authors will just self-publish since there are services available to help us. And the author on the panel? He had the guts to pretty much say just that. Good for him!
Posted by Kim Wolterman at 4:18 PM

Your book on display at PU! That is so cool!Also, meeting those authors. You are having too much fun.

What about Babs? Have you seen her yet?

Do I get to take (a little) credit for your many accomplishments? Sort of "I was there when all she had was a tiny idea" or some such thing. I was there, wasn't I?

Waaay cool, Kim! I love hearing about your adventures. Mitali is one of my fav people I follow on Twitter.