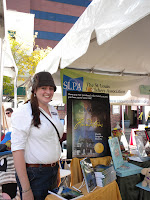 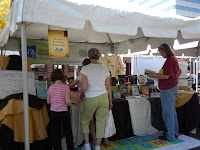 Having said that, do I think that having a booth at The Big Read is a waste of time and money for myself and the SLPA? Not at all, and here is why. We had a nice number of people inquiring about the organization and our upcoming meetings, so it was good exposure for SLPA. And for myself, a realtor asked me about the possibility of buying my book in quantity to give out as house warming gifts to her clients. She would never have known about my book had she not seen it at The Big Read. So even though I spent 6 hours of my day at the event and didn't sell enough books to cover the cost of having them in the booth, I still got exposure for my title and you can't put a monetary value on that.
Posted by Kim Wolterman at 9:06 PM