Not being inspired by any of the writing prompts on the list, I decided to come up with my own for this week's post.

To date, what has been your worst plane experience?

All of us have dealt with delayed or cancelled flights, screaming kids, the passenger who doesn't shut up for the entire trip, a seat mate who spills into your personal space, the person in front of you who reclines in your lap, the one behind you who kicks your seat, the unpleasant aroma of carry-on food or a filled diaper - I could go on and on.

But none of these things comes close to my story of being marooned - not on an island, but on an airplane. It was 21 March 1992, and I had a business meeting at Chicago O'Hare International Airport. It was a daylong meeting of marketing people from around the United States, so we had all flown in that morning and were flying home that night. Or at least that was the plan. We held the meeting in a room right at the airport for the sake of convenience. My trip home was on American Airlines Flight 1413, scheduled to leave at 6:14 p.m.

An unpredicted snow storm began that afternoon, and we were advised to change our tickets to an earlier flight. I was able to secure a seat on an American flight leaving at 4:15, and considered myself one of the lucky ones able to get out before the airport shut down. Some members of our group could not change their tickets.

My plane boarded at 3:30, and after a delay pushed away from the terminal and took its place on the tarmac waiting for clearance. That move ended up to be a costly one for all of us on the plane. Once another plane entered our gate there was no turning back. We sat on the runway for hours. My best move was hopping out of my center seat and claiming the two seats across the aisle from me so that I could spread out. We were all given our one soda and one package of peanuts (those were the days when you still received a drink and a bag of nuts for "free"), and that was it. We learned that there was only one runway open with 45 planes ahead of us waiting to take off. Additionally, only two of O'Hare's de-icing trucks were working.

There were no phones on the planes, and we were still years away from mobile telephones being a standard business travel accessory. I had no way to contact my husband, at home in St. Louis with our 6 year old and nearly 1 year old, to let him know the situation. He was sure that something terrible had happened to me.

The plane finally took off at 2:30 a.m., landing in St. Louis about 3:45 in the morning. Essentially we were on the plane for 12 hours. We barely got an apology as we deplaned. As for the people from my meeting who could not change their flights? They ended up being the lucky ones. They were able to spend the night in our meeting room where there was plenty to eat and drink. The rest of the airport ran out of food, and all the nearby motels were quickly filled.

I wrote a scathing letter to American Airlines regarding the incident. It will come as a surprise to no one that I never received a reply. I've taken the liberty of re-writing their 1990's slogan. 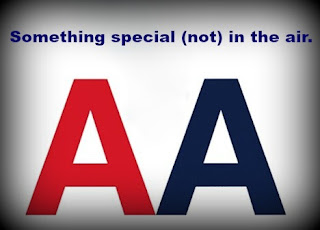