Masochistic folks are already posting the dreaded "only X number of days left until Christmas." That made me think back on my days as a child when Santa was so anticipated. With that in mind, I chose the following as my writing prompt for this week

What was your favorite toy as a child?

When I was about 9 or 10 I received a Thumbelina doll as a present from Santa. The first Thumbelina doll was manufactured by Ideal Toy Corp. in 1961. She came in three sizes - OTT-14 (Tiny Thumbelina), OTT-16, and OTT-19. The numbers referred to the length of the doll, although the dolls are actually a little longer than their numbers would indicate. All the dolls moved their heads when a knob on the back of the doll was turned. Beginning in 1962, some of the dolls also cried. Thumbelina was Ideal's best-selling baby doll during the 1960s.

My doll was the OTT-19, and at 20" long she was roughly the size of a newborn baby. Her head moved, and she made a crying noise when you bent forward as if to lay her down, stopping when she was raised up. I was thrilled! If I had a baby doll before her, I can't remember it. There was just one problem with these dolls. Due to their size, normal doll clothes would not fit. Ideal offered some clothing for them, but they were expensive and out of the budget for my folks. Mom purchased real baby clothes instead, or she sewed outfits for my doll.

When I first brought my doll over to a neighbor girl's house, she told me I wasn't allowed to play with them because my doll was too big! I went home in tears. Isn't it strange how the hurtful words of someone you considered a friend can stick with you years later? 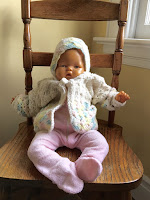 My affection for Thumbelina was not diminished, however, and I still have her to this day. She no longer cries, and the head motions are much slower when she is wound up. Like many aging ladies, she has lost a lot of her hair. I have her dressed in a newborn sleeper that was once filled with my daughter, and a crocheted sweater and hat that was lovingly stitched by my mother when I was expecting my first child. I have to say that it looks a little better on Thumbelina than it did on my son - haha.

In Thumbelina I'm reminded of the love of my parents, and days filled with a make-believe world when all I had to worry about was making sure that my precious doll was not crying.
Posted by Kim Wolterman at 8:00 AM