As we creep up on the end of 2017, it seems appropriate to write about New Year's Eve celebrations of the past.

How did your family celebrate New Year's Eve? How has it changed over time?

When I was growing up we did not make a big deal out of the last day of the year. My mom and dad sometimes played cards with the next door neighbors, and as they had a daughter my age, the two of us would play records, eat junk food and usually end up spending the night at one house or the other.

After I was married, we kept things pretty low-key as well. If we went out for dinner, we tended to eat early so we could get home before the drunks made roads unsafe. We would usually watch television, waiting for the big ball to drop in Time's Square. As our children got older, they would try and stay awake until midnight, and we would listen to the neighbors clanging metal pots and shooting off fireworks. As we have gotten older, we now try to stay awake until midnight!

I used to make New Year's resolutions, but I don't do that anymore. It always seemed to lead to disappointment and feeling bad about myself. Now I set goals throughout the year, and modify them as time and situations change. It keeps things more realistic that way.

The one thing that remains constant at the end of each year is my reflection on what has taken place over the past 12 months. It is a wonderful opportunity to think back on the many adventures that have taken place, and a chance to reflect on the blessings that have come my way.

Wishing all of you a happy and prosperous 2018! 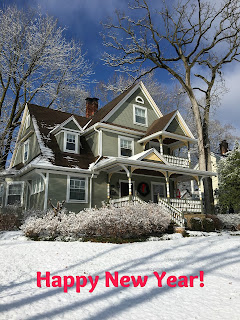