Since the writing prompt for last week was Naughty, it makes sense that this week’s would be Nice. I searched through the names in my family tree, looking for one that would be fun to write about. I found an Edgar Allan Poe, but first of all that was probably not a nice name to grow up with, and second he was a very distant relative by marriage only. 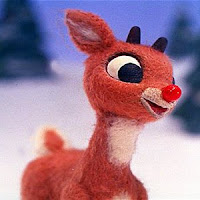 Then I found the name Rudolph Kemper, my paternal 4th great-uncle. Since it is just days before Christmas, I thought it might be fun to take a look at him. Rudolph was born about 1825 in Germany, the son of Henry William Kemper (my paternal 4th great-grandfather) and an unknown mother.

Henry arrived in Louisiana aboard the ship Mississippi on 23 December 1846, accompanied by his children: Anna Mary Kemper age 23, Herman Henry Kemper age 11, and Catherine Mary Kemper age 9. As Rudolph was 21 when the family left Germany, he either remained behind or had already traveled to America. I am assuming that Henry’s wife died in Germany prior to their departure.

The name Rudolph derives from two stems: hrod meaning fame, and olf meaning wolf. So in translation the meaning would be fame-wolf. In the United States we are all much more familiar with the name being associated with a famous reindeer. As the story of Rudolph the Red-Nosed Reindeer did not appear until 1939, Rudolph Kemper did not have to bear the bullying of other children laughing and calling him names. It would be interesting to know, though, if he did Americanize his name once he came to his new homeland. Did he go by Rudy? Or perhaps Rolf?

On my maternal side of the family, I have a 1st cousin 4 times removed who is named Rudolphus Orth. He was born in Germany in 1812. His brother John Orth named a son Rudolph Orth in 1845. So I have had a few fame-wolfs in the family.
Posted by Kim Wolterman at 12:47 PM