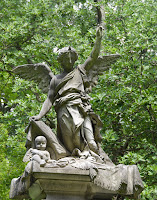 Maria Anna (Saner) Kübler was a young woman, probably in her 30s, when her husband Josephus died in 1815. She had already suffered so much in losing her first born when he was just 4 months old, and her only daughter at the age of 2 1/2 years. It must have been overwhelming to find herself alone to raise 3 boys and take care of the farm. Perhaps her parents, Johannes Saner and Maria Anna (Jeker des Huglis) Saner, were still alive and able to help and comfort her.

Josephus had four sisters and four brothers, so undoubtedly one or more of them stepped in to help this widow and her children. It is quite probable that some of them lived on the same farm and were able to keep things running smoothly.

Just as Maria was adjusting to her new normal, something that happened over 7,500 miles away would impact not only her village but also people around the world. In April of 1815, just 2 months after Josephus died, the volcano Mount Tambora erupted in the Dutch East Indies (modern day Indonesia). The top of the volcano was blown off, destroying the top 1/3 and leaving a crater 3 miles wide and 1/2 mile deep. Tens of thousands of islanders were burned alive or killed by flying debris. Others later died of starvation because the crops were ruined.

The giant cloud of particles released by the volcano spread around the world, blocking sunlight and causing a decrease in average global temperatures. The unusual climate change had the greatest impact on the eastern United States, Atlantic Canada, and parts of western Europe. Cool temperatures and heavy rains resulted in the failure of crops. In many places the wheat yield was 75% lower than was normal. The cloud cover would impact the world for three years.

By 1816, landlocked Switzerland was experiencing the effects of the bad weather and crop failure. With such a mountainous terrain, agricultural land was already in short supply. As bread prices soared, starving mobs stormed bakeries. The lack of food forced people into eating things they never would have considered consuming in the past. The famine was so severe that the Swiss government declared a state of emergency. Once it became aware that citizens were consuming any plant they found, it also issued information on how to distinguish poisonous plants from edible ones.

The lack of food was compounded by the spread of epidemic diseases, which caused widespread mortality. In Switzerland, the death rate exceeded the birth rate in both 1817 and 1818. Fortunately for the Kübler family, the eastern part of Switzerland was more gravely impacted than the western sections of the country. This, coupled with the fact that they had their own farm, saved this family from the fate of many of their countrymen.

Posted by Kim Wolterman at 3:18 PM